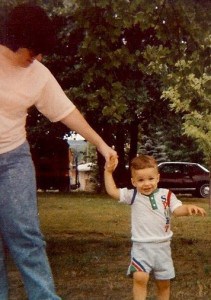 My mom (1962-2002) and I, sometime when I was around 3 years old. I was no doubt running towards a future where there’s Internet access.

I have a job now that didn’t exist when I was growing up. I never got on the Internet until 6th grade, and I didn’t have access at home until dial-up became affordable around the time I was in 8th grade. Originally, I wanted to be a “scientist”, then an “artist”, then I narrowed it down to a cartoonist, then a doctor (thanks to my love of NBC’s ER), and then somewhere around the age of 15 it hit me that I was going to be a web designer. With the exception of being a doctor, one can see how it all sorta fits together. 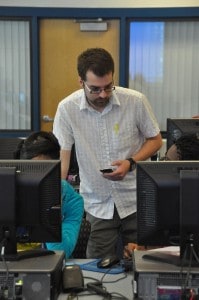 Me at Vincennes University showing some high school students how phones render their sites. Yes, that’s a pen in my shirt. So sue me.

I’ve been making websites for over 10 years now. I did my first one for a client when I was 15, and I still maintain that site today (albeit, not the original). Come my Junior year of high school I was hired at the Washington County Historical Society where I worked as a researcher, genealogist, tour guide, “tech kid”, and web designer. I quit that job in July 2005, just two months after I graduated, to come to Indianapolis.

Here I got a job in 2006 as an intern at the Indiana Supreme Court on their web team. A year after that I was hired as a full-time employee at the age of 18. I was promoted every year up to Senior Web Developer, and then I quit in November 2009 to pursue my own independent business.

That’s where I am now. In addition, I was the founder of the local Refresh chapter where we did a lot of great work for charity, I teach a little at Ben Davis University High School, and I co-host a web design conference called re:build with my good friend Tony.

I’m also an avid cyclist, having decided in December of 2011 that I’d sell my car and get around town only by bike. Since then, I’ve pedaled over 3,000 miles and counting.

In December 2012, shortly before the world was supposedly going to end, I rented out my home in Indianapolis, cleared out many of my belongings, and moved to New Haven, Connecticut, where I currently reside.