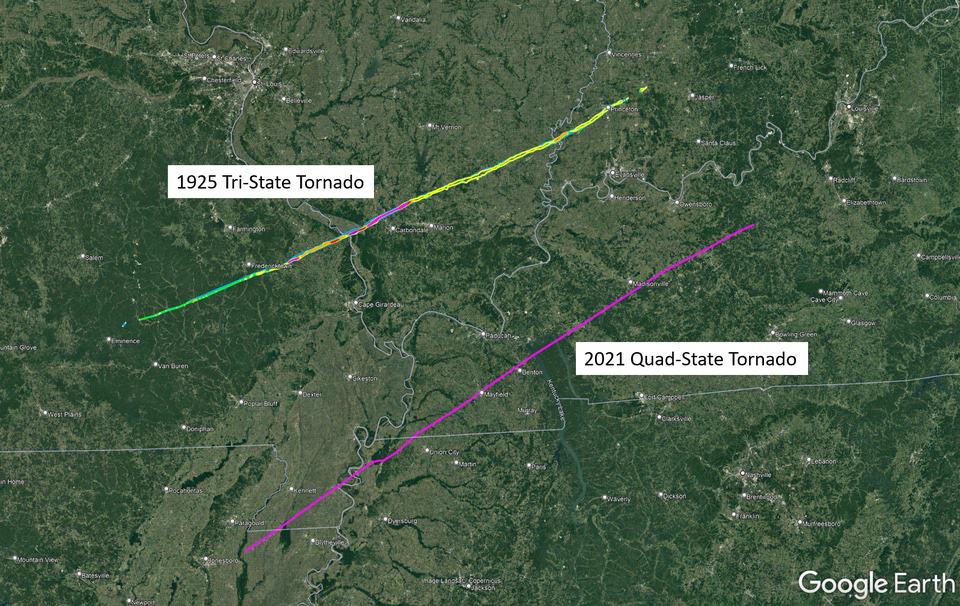 I’ve been researching the 1925 Tri-State tornado for a new book I’m writing. That event on March 18, 1925 started in eastern Missouri, ran across the Mississippi River into Illinois and straight over into Indiana. This week’s Quad-State Tornado struck a similar path and trajectory.

There’s debate over the length and intensity of the 1925 Tri-State Tornado. First, we had no radar capabilities. The Weather Bureau, as it was known at the time, more or less paid no attention to tornados or issuing guidance of any kind about the possibility of tornados. It wasn’t until March 1925 that the Tri-State captured the nation’s—and the Bureau’s—attention on tornados. And to get at data on the tornado we relied on people’s accounting of where they were—if they survived it.

There’s a segment of the Tri-State in far eastern Missouri where almost no one saw it. The damage was minimal there only insofar as there was nothing for it to hit but trees and an occasional telegraph pole. As recently as 2010, the National Weather Service began studying this event with modern engineering practices. But there are places along the Tri-State’s path that were so cleanly wiped away the towns never rebuilt. You can travel to places in Illinois and find steps or an occasional chunk of sidewalk in what appears to be an empty field 96 years later.

What made the Tri-State more remarkable was the size and scope. The official track puts it at 219 miles long, between 3/4 and 1 mile wide, for 3.5 continuous hours. Unlike the 2021 Quad-State, the Tri-State happened in the day at around 1pm CDT and lifted around 4:30 pm CDT near Petersburg, Indiana. There’s evidence to believe that same storm cell dropped another funnel over the northeast portions of Washington and southwest portion of Jackson Counties in Indiana a short while later. The twister was rated an EF5 with average speed of 62 MPH and 73 MPH at its maximum.

695 people were killed with 234 in Murphysboro, Illinois alone. 2,027 people were injured. Many of the iron and ore workers in Missouri and Illinois were underground when the tornado hit. They came up to find everything and everyone gone. The Tri-State is the deadliest cyclone in history—a record that still stands today. It’s also the deadliest tornadic death event at a school, where 33 kids were killed in DeSoto, Ill. Many other schools were in its path. Only bombings and explosions have taken higher numbers of student lives at a school in the U.S. since. And the rescue efforts were unlike today’s modern government response. People across the country loaded nurses, doctors, food, and medicine on special trains that ran as close to the impacted areas as possible. The first recorded medical flight took place to deliver antibiotics. Today’s response is far different, for better or worse.

Meteorologist Jack Sillin on Twitter noted this complete path of the Quad-State storm:

Here's a look at last night's most powerful supercell from a radar perspective.

The storm was a discernable entity for just over 11 hours as it traveled 600 miles from AR to OH.

During much of that time, the storm exhibited a classic "hook echo" indicative of strong rotation. pic.twitter.com/kBRcAhKLyv

The Quad-State Tornado’s early reports aren’t available yet, but it looks like the Quad-State may have bested the Tri-State by about 10 miles in distance and up to an hour in duration. This is defined as the time the twister touches the ground and stays there on its path. We’ll have better data on the Quad-State event, but the Tri-State is a little fuzzier. We had to rely on early reports and visible signs of scarring—where the earth appears “scarred” with the marks of the tornado. There’s some debate about 80 miles in whether, based on radar readings, it may have lifted briefly. For comparison, the average tornado lasts about 1-2 miles before weakening or cycling out and about 70% are rated EF1 or EF2.

We still use this “look and review” method to measure tornados today, but in 1925 people had to walk along the path and look for debris, de-barked trees, and grass and soil that had been uprooted or twisted along the way. In fact, scientists have done this as recently as 2010, looking for debris in fence posts and trees that might indicate how much wind force was necessary to drive metal, wood, along that path in 1925. Some of that debris is still stuck in posts and trees today.

It’s possible the unofficial distance of the Tri-State was closer to something around 250 miles. The early parts of that tornado may have skipped off the ground, it might not have. 219 is the accepted “minimum” of what we know. As of this writing, 227 miles, or about 8 miles difference, is all that separates the Tri-State from the Quad-State’s length. (Again, the NWS will issue a final result in the next week or two.)

It’s hard to believe this, but I’ve discovered in my research that tornado ratings—whether it’s an EF3, 4, etc.—are somewhat contentious. There are defined standards for cyclone ratings and they have an impact on everything from world records to our understanding of the science and insurance and government disaster relief.

Engineers from the NWS rate tornados in part by the damage visible from the ground and the sky. But to get a measure of the force of the wind they compare the strength of modern buildings to the expected damage. Engineers look for things like, “Did it blow a train car off its tracks and how far?” and “Did it rip trees or chains or other heavily-secured items straight out of the ground?” This also means, for example, a modern medical facility built to the highest standards of wind and storm resistance, that is completely torn apart would indicate the strongest EF5 rating.

The contentious part is many communities—like those in rural Arkansas, Tennessee, Missouri, Kentucky, Indiana, et. al don’t have those kinds of facilities. If the tornado struck Little Rock or Louisville, we’d know more and potentially rate it higher than if it hit Mayfield, Kentucky as it did. Soso, Mississippi is one such example where the lack of structures to measure against meant a 2020 Easter weekend tornado was rated EF4 and not an EF5 as many believe. We also tend to have a different response to a tornado striking a major metro as being more serious than one hitting a rural town.

Surveyor’s are quick to throw out results from buildings that are, plainly, in disrepair, too. Under the notion, “Well, the building was already weakened, so the data’s off.” Which, again, can disproportionately favor higher ratings in metropolitan areas.

The NWS will likely issue a conservative EF4 rating today or tomorrow and we’ll have to wait a week or more to see if they raise that to an EF5 later.

The Tri-State is still a monster of a storm, and both will be remembered

The Tri-State struck in the middle of the day and there’s little debate about its EF5 status. People reported standing outside and the sky suddenly became black. For most people along the path it had been a rainy day anyway, but then the twister became rain-wrapped, meaning the rain, mud, and debris was so far around and up off the ground people couldn’t see a distinctive funnel even when it was right on top of them.

The Quad-State was a nocturnal event, which itself is remarkable, and it struck in December. Unlike 1925 where no warnings were given excepting people’s pioneer instincts, some parts of the Quad-State Tornado’s path had as much as 20 minutes of warning. Not watches, but warning. That’s remarkable given our averages for warnings are still barely measured in double-digit minutes. Still, at least 90 people died—possibly because of it being nighttime, possibly because people didn’t think a twister could come in December, and possibly because it was just impossible to secure one’s self in the face of such a funnel.

As an aside, there’s a lot of debate about climate change causing more or worse tornados and shifting Tornado Alley from the plains, Oklahoma, and Texas further east into Indiana, Illinois, Kentucky, Missouri, Mississippi, and Alabama.

I’m not willing to say that’s not happening, but I think it’s too early to tell. Our data gathering on tornados is weak compared to just about any other event. Earthquakes are probably the least understood and least predictable disaster event. I think we have better chances of understanding meteorites than we do tornados sometimes.

Interestingly, Indiana had almost no tornado warnings this year. Which, unlike a few years ago when the sirens went off by my house multiple times a day, is just an anecdotal data point. Marshall Shepherd has an interesting piece in Forbes with some data on the nature of climate change and its impact on tornados. The tl;dr: we just don’t know yet. It feels that way, but we just don’t know. If it is true, we should expect death tolls and damage costs to increase simply because cities and towns are more frequent and dense in the Midwest than the plains.

For the people impacted by this year’s storm, the trauma and memories will stay with them forever. Most likely in another hundred years, if storms don’t increasingly generate equally lengthy paths, someone will interview them for their memories of the event. Right now, they’re facing a Christmas with almost nothing, surrounded by death and destruction, and we should remember this event—or any tornado—is not entertainment.