After six months of less work, my heart shows the difference 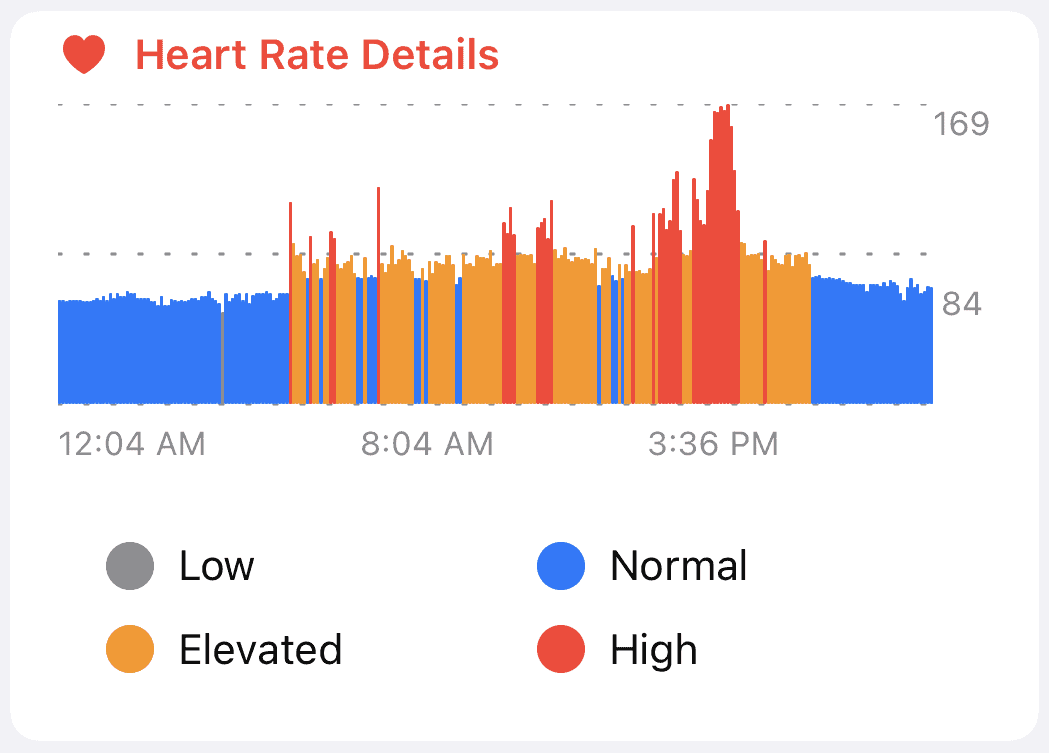 Sometime around March or April of this year I noticed odd trends in the heart rate data my Apple Watch collects. I get that an Apple Watch isn’t really a medical device, but you wear the thing long enough and some trends start to emerge.

I use a couple of different apps to pay attention and visualize to this stuff. CardioBot is my primary measure for overnight and resting heart rate. It takes data from my Apple Watch and does the work of displaying it on a graph from Apple Health.

You’ll notice the blue through the night. That’s “normal” and never really concerned me much. Then you can see when I got up, usually around 5 or 5:30 and in about an hour after that I’d do some kind of exercise. It was February, so I probably did some modest HIIT work.

Then there’s the rest of the day, including spikes of elevated or high heart rate that, again, I didn’t think much of it. The red at the end of the day is when I’d exercise again (I do about 60 minutes a day, split in two half-hour increments because the summer is spent outdoors on my bike). You’ll notice, too, my heart rate stays pretty high until bed time.

What’s unusual about those dates in April is I had some time off around then. And on both days I did my exercise for the day all in one chunk, with the 23rd in the afternoon and 24th in the morning. This is not out of my usual routine. For years I’ve done exercise in the afternoons on weekdays and mornings on weekends for the simple reason I’m a morning person. I don’t like to “waste” my mornings when my brain is best equipped to do work “merely” exercising. I save the exercise—the stuff I don’t have to think hard about—for afternoons. Except on weekends when I like to just get it out of the way so I have the rest of the day to do whatever needs doing around the house.

You’ll also notice on both of those days I’m actually in the “low” heart rate territory, as shown by the gray bars. Low never happened in the middle of the day. I didn’t even know that was possible.

This trend repeated for other times I went on vacation. Medical experts might quibble with my reasoning, but generally when I’m on a vacation I exercise less than when I’m at home. I thought maybe this was a sign my body needed a more robust rest from exercise, but this pattern repeated even into May and June when I started a more consistent and typical one-day active rest, usually with walking or yoga.

But the trend didn’t budge or look much different.

Around this point I started feeling concerned. I know my body is capable of having a lower resting heart rate, so why can’t I maintain it? Why is my heart rate so much more dialed up during the work week when I’m just sitting at my desk? And why is my heart rate almost as high at night as it is during the day?

The answer, it appears, was work.

Impact of work on my heart rate

My work days were getting out of control, and the kind of work I was doing was just plain silly. I’d wake up to Slack messages and emails, I’d go to bed to more Slack messages and emails. I was living in what Cal Newport calls “the hive mind of office culture” with coworkers and clients just slamming away at their keyboards constantly, expecting constant near-instant replies, and all for things that, frankly, just aren’t that important. I don’t even know how much time in my life I’ve wasted on, of all things, graphics for people’s random Facebook posts.

I’m not a doctor. I’m not working in the West Wing. I don’t drive truckloads of school children or enriched uranium around all day. I make websites. I adjust navigation menus to get people to click one thing over another and tweak button colors and send emails to people who don’t want them.

My job was getting me so riled up it was showing up in my heart rate. And it was negatively impacting me around-the-clock. The constant agitation was screwing up my sleep, even if I felt like I was sleeping a solid 7-8 hours.

Some might disagree, but I think it’s fair to say most people who know me would call me “shockingly calm”. Perhaps annoyingly so since my staid midwestern upbringing has made me into a rather consistent, routine-driven, collected person.

In those brief windows where I wasn’t totally connected to work, usually on a Saturday night into a Sunday morning, I could see what life would be like without being plugged into this ridiculous hive mind where everyone CC’s everyone and money is the ultimate goal of everything despite the true costs. Plus, I wasn’t even making that much money! Not for this level of literal heartache.

So I left the job. I had already sold my business, so this wasn’t a huge change. But it was to me—the thing I had devoted 12+ years to was now just someone else’s thing.

The results of big changes in workload

But the results can’t be argued with. Here’s a random day not long after I left, on Wednesday, September 1, 2021:

That might sound dangerous, but given my activity levels and the fact for ten years I’ve commuted around town entirely by bicycle, my resting heart rate should be pretty dang good.

A normal resting heart rate for an adult my age is about 60-100 bpm. A well-trained athlete could be closer to 40. My average earlier this year was 65-75bpm through the day. My average now is about 53-60bpm.

I use another app called Training Today that measures my baseline hear rate variability (HRV). It took me a while to understand HRV, but it helpfully plotted my heart rate on a graph over a rolling 60 day period. It doesn’t show me historical data back that far, but it was so dramatic I took a screenshot back in October that shows from about mid-September, or about a month after I left my job, to then:

That trend continued for months, leveling off into what was a much more reasonable zone. For months I was just in a constant state of bad HRV. It was telling me to take it easy, don’t train too hard, don’t move too fast. I’d have one, maybe two, good days per week where I was in the zone. Rest days seemed to have no impact. But once I changed my work, the kind of work, and who I was working with, I kept improving. Now my HRV reflects how hard I lifted or ran the day before, not how irritated some email made me feel.

Changes in mood and how I feel

I suspect it’s fair to say I’m not a very emotional person. I’m “annoyingly good” at keeping my emotions and feelings largely undiscoverable or unrecognizable. Like Leela said in Futurama, “I usually keep my sadness pent up inside where it can fester into a mental illness.”

But the change has been dramatic in how I feel, even if it doesn’t seem that way. We hear a lot about middle-aged guys who keel over from the stress of their job and I think I speak for most people when I say, “That’s just nuts. That should never happen.” But here I was on that same path and I didn’t even realize it.

I’m inclined to believe most people would prefer a work life where they possess autonomy and control. This is what makes work so hard for young people in their first junior positions, because by definition they don’t have that level of autonomy or much control over anything.

At this point I’ve been doing website work for eighteen years, slightly more than half of my life now. You hear people say things like “raise your rates”, “fire bad clients”, etc. but for a lot of my career that’s been an impossible task simply because I felt bad. I just wanted people to have nice stuff. And, truth be told, I want people to like me and I never get consistent feedback that’s the case.

But I also needed people to recognize most of this stuff just isn’t that important. So your website went down—give it a minute! So your website has a page with a weird visual bug that makes an image appear too close to the edge—why are you actually calling me on the phone about this?

I find it rude for other freelancers and entrepreneurs to tell people what they should do within their business. They don’t know the people you’re working with. But taking steps to extricate myself from that day-to-day grind was worth it for me. It might be time for you to think about this, too.

It’s cliche, but Steve Jobs’ old chestnut about “being a beginner again” has more meaning to me now.

Now I refocus my time with more control than ever and a lightness and freshness I haven’t had since maybe ever. I get to focus on writing and for the first time in ten or fifteen years I have something resembling a plan in my head for the kind of life and work I want to build.

I have no regrets, even though I do worry about former clients and their success. Their business was my business and it’s hard to totally leave that behind.

George Washington, John Adams, and Ben Franklin used to write a variation of a line that was in the popular culture of their day. I always thought it was attributable to George Washington, but it was actually from Cato, a play he saw repeatedly and was among his favorites. He and others liked it so much they repeated it in their writings and oratory and it strikes me as worth mentioning:

We can’t guarantee success but we can do something better. We can deserve it.